One thing I’ve noticed during the decade I’ve lived in the Midwest is that everyone here makes a mass exodus to Florida for spring break. Having grown up mostly in the south where a coast was just a hop-skip away and therefore taken for granted, this exodus is interesting to observe. Spring break leaves my home town feeling like a ghost town, and if the local schools didn’t stagger their breaks, I’m afraid hospitals might even be forced to close. Ok I’m exaggerating. But it certainly does make me feel like a serious nerd when my spring break plans center on visiting…a museum.

Yep, this historical fiction author has been known to torture her children with Colonial Williamsburg, Civil War re-enactments, and loooong leisurely walks around Revolutionary War battlegrounds at Yorktown. Hey, cool it, we do fun kid stuff, too (which is why I can advise you to never ever attempt a weekend in Colonial Williamsburg immediately after a week in Orlando for reasons that should’ve been obvious to me).

Last spring break we hit a few museums in Chicago. This year we chose to see a very special exhibit in Cincinnati; the Dead Sea Scrolls. Perhaps the world’s greatest archeological treasure, they were first discovered by a Bedouin goat herder near Qumran in 1947. With six hundred artifacts on display, this was the largest collection from the Holy Land ever to go on tour outside Israel. It included a copy of the ten commandments from about thirty BC, the oldest known, which took my breath away.

Even my kids were impressed. Seriously. My daughter even drew highly accurate pictures of the scrolls in art class when we returned. See… 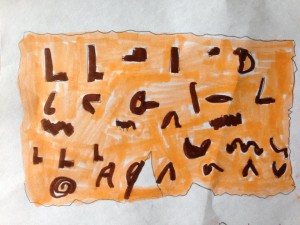 When I asked her for an exact translation, I received a blank stare. However, for readers who may be interested in what I learned about ancient cosmetics during this museum adventure, I have a treat! 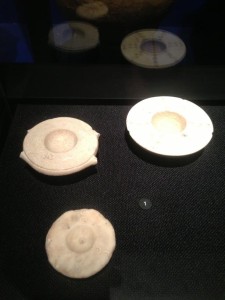 These are Iron Age (seventh-ninth century BC) limestone cosmetic bowls from Hazor, Megiddo, and Arad. Ancient Israelites combined kohl or antimony with fat or resin in these, dipped a metal or ivory wand into the mixture, then used it to line their eyes. Sounds like a lot of work to me.

Decorative palmettes are carved into the underside of this bowl of steatite from the same period. 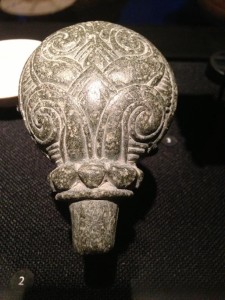 Keep in mind these are Iron Age tools from the middle east. Stay tuned for more about eye cosmetics from other eras.