Time to deliver on the goods. I promised details on cosmetics in the seventeenth century, and today…I’m trying to decide where to begin.

When I started researching for THE DUCHESS OF RICHMOND, it was difficult to find information on the web about makeup during Restoration Period England. I quickly discovered the reason for this – there isn’t a ton of information out there in the first place.

The 1600’s were rather eventful. England split into Royalist and Parliamentarian factions and proceeded to bludgeon each other during the Civil Wars. These ended in 1649 when Parliament executed the head of the Royalists, King Charles the First. Royalists fled into exile, and the Puritan head of the Parliamentarians, Oliver Cromwell, took it upon himself to rule England as a Commonwealth for the next eleven years. Apparently Puritan rulers are pretty drab, because England got sick of the situation and invited the heir to the throne, Charles the Second, home. They called this the Restoration of the Monarchy, and legendary partying ensued.

Throughout this upheaval, there were necessary changes in access and attitudes toward cosmetics. Wars shorten supply. Puritans denounce artifice. Restored Monarchs revel in it. Despite the confusion, time was kind enough to preserve family letters, paintings, records left by herbalists, plays, poetry, woodcut illustrations, and extant cosmetic containers to help us keep track.

So as you read future posts on this blog about gross ingredients (puppy dog fat!), odd elements (mooches and plumpers!), and strange practices (forehead shaving!), keep context in mind! We’re going to jump around through the decades mentioned above to get an understanding of beauty trends in the seventeenth century. In closing, a work by a Dutch painter from the same period. 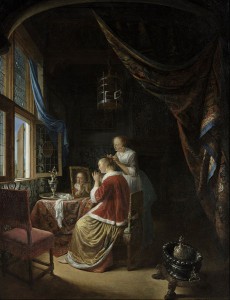