A friend recently requested a lipstick recommendation, and I couldn’t name a single one. I’m a lip liner and gloss kind of girl. My technique became popular in the 1970’s, but glossing the lips seems to have its roots in the 1930’s, when black and white film actresses needed to lend contour to their lips.

The lipsticks we know, in retractable tubes, were invented in 1915. Lipstick itself, however, has been around for thousands of years. Archeologists discovered a five thousand year old sample of lip rouge in an Egyptian tomb, and Etruscan women still rouged their lips in the sixth century B.C. In the fourth century, early Christians began their unceasing complaints against cosmetics, including lip paints. Even when Europe was thrust into the Dark Ages, men and women in the thriving Indus Valley enhanced their lips with betel.

Ladies in the Middle Ages went for a pale look, and if lips were rouged it was lightly. They used plant matter and minerals. The colorful Queen Elizabeth I’s lips were painted “rubie red.” And by the time James I united Scotland and England as the first Stuart Monarch, cosmetics were more widespread.

The primary lip colorant in use from then into the Restoration Period, and used in my upcoming novel, was known as Spanish Red. The Spanish created this with cochineal insects imported from the Americas. It came on paper and was applied moistened with water or dry with a cloth.

This is an image of just how those prized cochineal bugs were collected. 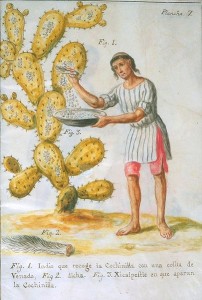 In 1740 an alternate became available when a recipe for Red Pomatum for the Lips was published. It called for melted white wax, ox marrow, white pomatum, and a dram of alkanet stirred in until the concoction acquired a red color. I don’t know about you, but I’ll stick to my handy tube of lip gloss!