I’m delighted to host one of my most favorite people today! Kate Quinn is here to talk about her latest novel and dish on Renaissance hair care…

Kate Quinn is a native of southern California. She attended Boston University, where she earned a Bachelor’s and Master’s degree in Classical Voice. A lifelong history buff, she has written three novels set in ancient Rome: “Mistress of Rome,” “Daughters of Rome,” and “Empress of the Seven Hills,” all of which have been translated into multiple languages.

Kate made the jump from ancient Rome to Renaissance Italy for her fourth and fifth novels, “The Serpent and the Pearl” and “The Lion and the Rose,” detailing the early years of the Borgia clan.  She also has succumbed to the blogging bug, and keeps a blog filled with trivia, pet peeves, and interesting facts about historical fiction. She and her husband now live in Maryland with a small black dog named Caesar, and her interests include opera, action movies, cooking, and the Boston Red Sox.

The official blurb for THE SERPENT AND THE PEARL:

Rome, 1492. The Holy City is drenched with blood and riddled with secrets. A pope lies dying and the throne of God is left vacant, a prize awarded only to the most virtuous – or the most ruthless. The Borgia family begins its legendary rise, chronicled by an innocent girl who finds herself drawn into their dangerous web . . .

Now Kate, give us your quick-drop on THE SERPENT AND THE PEARL…

Take a vivacious blonde with floor-length hair, add a cynical dwarf on the hunt for a serial killer, toss in one fiery cook with a dangerous past, then stir to a boil, light on fire, and serve for a hell of a read!

Why the switch from ancient Rome to Rome under Borgia rule?

Because I was starting to have daydreams about writing a book where I never, not once, had to type the word t-o-g-a.  I love ancient Rome, but I needed a vacation!  And the Borgias grabbed me as soon as I started reading about them.  That whole era is just saturated with artistic and scientific advancements side by side with bloody mayhem, and the Borgias are the poster children for all that gorgeous Renaissance chaos.

You say your culinary husband inspired dishes in the Serpent and the Pearl, and that his traits appeared in the hero of Mistress of Rome. Can I borrow him? In what other ways does he influence your work?

My Navy sailor husband probably shows up the most clearly in my last book, “Empress of the Seven Hills,” which features another tall freckled left-handed military man who doesn’t suffer fools even when they’re superior officers! As for “The Serpent and the Pearl,” one of my two heroines is inspired directly by my husband’s fiery Sicilian grandmother, the one who taught him to cook so well.  To this day he can’t break pasta into a pot of water without a wince and a “Sorry, Grandma” because just like my Renaissance cook heroine, his grandmother would whack you over the head with a wooden spoon for daring to break pasta instead of folding it.  She turned my husband into a fabulous cook; now that “Serpent and the Pearl” is out, he’s having fun cooking his way through all the recipes in it.  Who knows, maybe there will be a companion cookbook?

I’m really into the use of cosmetics throughout history. Did you uncover any interesting beauty regimens during your research of the Borgia family?

My second heroine Giulia Farnese was one of the most famous beauties of the Renaissance, especially known for her floor-length hair, so you can bet her beauty routines are meticulous.  Some of the Renaissance cosmetics recipes I found are absolutely vile, like a face mask that calls for dove entrails.  Others, like a rinse for blondifying hair which was made out of saffron, cinnabar, and sulphur, sound a bit nicer.  Renaissance ladies were all mad for fair hair, so a favorite girls-day-out back then was to head up to the rooftop and put on big-brimmed crownless sun hats so you could spread your hair out under the sun to bleach it, but still keep your skin white!

Finally, a discussion on craft. Your sentences are so precise and well paced! Is this a natural gift or do you have to edit a work to death before it’s in such great shape?

Edit, edit, edit.  Re-read, curse a little, edit some more.  One of my worst habits is that I start unconsciously relying on favorite words or phrases.  Almost the last thing I do is to run a Search in my manuscript for the words and phrases I like to overuse: shrug, smile, grin, glare; arms folded across chests; people tilting their heads; etc.  But it’s like a Whack-A-Mole game: no sooner do I push down one set of over-used words than another set pops up in its place!

Thank you, Kate! It is always a pleasure! Do I finally have the secrets to your own lovely golden tresses? Is that saffron or cinnabar I smell? I’m headed for the spice aisle right now! 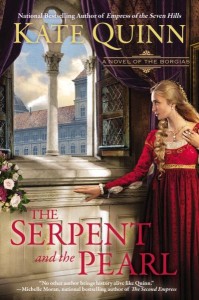 The Serpent and the Pearl by Kate Quinn

~Praise for THE SERPENT AND THE PEARL

“Three compelling characters weave a tangled trajectory through the life and politics of 15th-century Rome.  Carmelina’s sharp tongue, Leonello’s caustic wit, and Giulia’s unconditional good humor in the face of danger play off each other beautifully to create another riveting novel from Kate Quinn.”