There are few scents that soothe the senses like lavender. Lavender and I have enjoyed a long and comforting affair. I fell in love with it during my childhood when I saw rows of it planted at an old plantation house in Virginia. Oh how it sweetened the air and entranced the bees bobbing from stem to stem! My favorite tea at night is a mixture of homegrown chamomile and lavender, and a few drops of lavender oil in a bath is an easy escape from “crazyeverydayness” (moms will understand that made-up word). Several years ago, a favorite neighbor gave me a 4 inch pot of English Lavender, and that plant has grown to a leggy 4 feet wide. I harvest what I can for tea, and buy extra to create gifts like this… 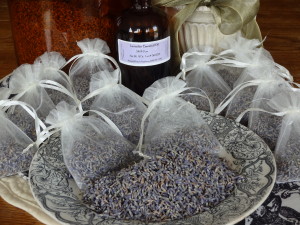 But I’m not the only one entranced by lavender’s heady charms. Ancient Roman soldiers supposedly used it to perfume their bathwater. They are the ones likely responsible for importing it in 200 BC to England, where tourists still love to buy bars of lavender soap. Around 40 AD the Greek physician Pedanius Discordes wrote De Materia Medica, and proclaimed lavender to be “like Hyssop, good for griefs in the thorax. It is also mingled profitably with Antidotes.” His botanical wisdom was quoted up through the seventeenth century, when the English followed the example set by the Stuart Royals and used lavender in perfumes. Look for more about that in posts to come!

Personally, one of my favorite uses for lavender is in linen drawer sachets. I belong to a group of lady writers who have become very dear friends over the last year; they comfort through disappointments, cheer through victories. One of them is handy at the pottery wheel, and sent me a delightful tea mug. The only payment she requested was that I pay the shipping cost forward. So I distributed the sachets above to everyone in the group. It was an appropriate gift, I think, to give soothing lavender to my comforting friends.